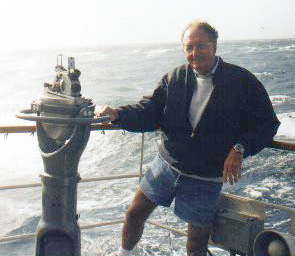 Robert Carter OAM, the founder of the Australian Society of Marine Artists, and President from  2001 to 2016, has had a life-long interest in maritime affairs and happenings – in particular, the sail-driven ship.

Growing up in the Sydney harbourside suburb of Manly, during World War II, gave him many opportunities to observe shipping leaving and entering port. Significantly, three of the last sailing ships in commission came to Sydney at this time plus another shortly afterward.

He also realised that to paint sailing ships authentically he must learn more about them! This started with a visit to an old seafarer friend who had been around Cape Horn in sailing ships and then led to contact with others, most of whom were members of  The International Society of Cape Horners. Through them, he was able to contact over 400 of their members, both here and overseas.

Through his association with the Cape Horners and others, Robert gathered a wealth of material that ultimately produced his first book, Windjammers – The Final Story. It is an anthology of anecdotes and memoirs from the last living men and women to have sailed in a commercial sailing ship, most of them around Cape Horn, illustrated with over forty of Robert’s paintings.

It has been described as a definitive work and he was awarded the Order of Australia for his contribution to the Arts, for his documenting and illustrating of the last years of the commercial sailing ship.

Robert’s second book, Paint Me A Ship, is a two-part book, Part 1 being a collection of Robert’s past work, reflections on his approach to marine art and a history of how the Australian Society of Marine Artists came into being in 1996. In Part 2 there are over 90 examples of ASMA members’ work.

More recently he has completed a monograph titled Wartime Windjammers, illustrated with his paintings and tracing the key role paid by the last sailing ships during World War II.

In 2006 he was also appointed Fellow of the International Society of Marine Painters.

In 2011 Robert was awarded the Order of Australia Medal for Services to the Arts through the research, illustration and recording of the history of the last commercial sailing ships.

Subjects: Robert specialises in oil paintings of sailing ships from the clipper and post clipper period, and maritime happenings from the past