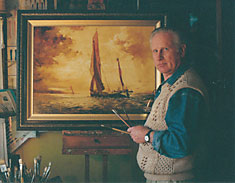 Derek was born in the South-East London Suburb of New Eltham. Completing his secondary education during the War years, he then entered the Woolwich Polytechnic School of Art where he enjoyed grappling with the tasks of becoming a commercial artist. During his time as a student at Woolwich, on the busy River Thames, the seeds were sown for a lifelong interest in the London River and its water traffic.

Later, in his work at a leading London commercial art studio, Derek developed his artistic skills, eventually specialising in aeronautical and automotive artwork. After moving to Australia in 1953 he continued in this challenging area of technical commercial art as a freelance artist, working on commissions from leading airlines and vehicle manufacturers.

Whilst maintaining his commercial art practice, Derek and his wife continued to travel widely, developing his interest in marine and landscape painting. After retiring in 1991, they returned to the UK and toured the rivers and canals living aboard a narrowboat, during which time he wrote and illustrated articles for the canal-boat media, Canal & Riverboat and Waterways World. Again, in 2005, in a motor-home tour of the UK, they were able to visit many places and sites that had associations with the Thames Barge, the interest which first began while he was a Thames-side art student. A solo exhibition of barge paintings at Pin Mill rounded off this visit.

Returning to Australia, Derek persevered with the subject of marine art, particularly the study of the London River Barge – a desire perhaps to help prolong their memory in pictures. He paints at his studio residence in Greenwich, Sydney.

Derek has exhibited work at the Guildhall in London with the Society of Aviation Artists, the Pin Mill Gallery in Suffolk (one of the great remaining centres of barge activity ) and has pictures in corporate and private collections in Australia and the UK. He says: “I’m pleased to be a foundation member of the Australian Society of Marine Artists and if I spend the rest of my time painting the marine scene with as much pleasure and satisfaction as I have had with aeronautical and automotive subjects I shall be delighted.”

Subjects: Specialising in the Thames Barge and marine history.