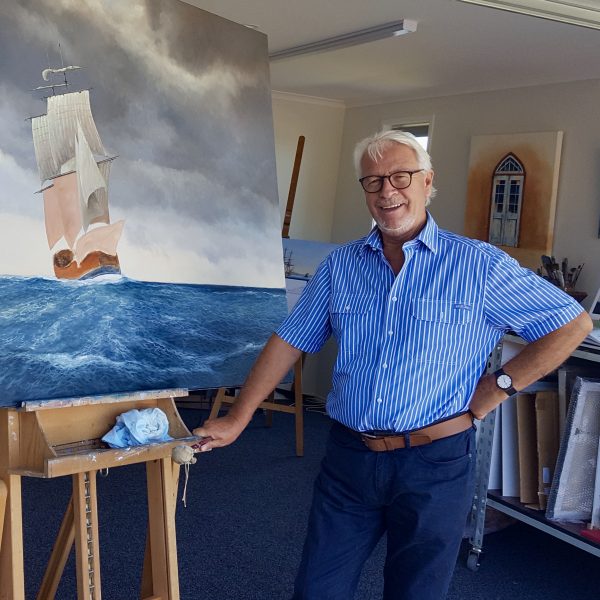 I’m a self taught artist born in the port of Dartmouth UK, a port of tall ships, warships, yachts and fishermen. I was blessed with an artistic mother and a fisherman father so oil paints and crab pots were part of my early home life.  I lived several years on the West coast of Ireland before joining the Merchant Navy in 1974 spending the next ten years tramping on small cargo ships around Northern Europe, the Mediterranean and North west Africa.  This seagoing life imbued me with a great respect for the elements and a broad understanding of nautical matters.  Since coming shoreside I still take every opportunity to head out to sea under sail.

I immigrated to New Zealand in 1995 having had several solo and joint exhibitions of my marine art over the years, I’m retired and live in Nelson surrounded by beautiful, beaches, mountains and bays.  Select galleries market my paintings in New Zealand and California and I frequently receive private commissions and undertake tutoring.  I alternate between traditional marine paintings and a diverse range of nautical subjects, this diversity driven by examining what appears mundane yet has its own interest and beauty.  My nautical artwork has been utilised for book illustrations and covers in the UK, US & NZ.