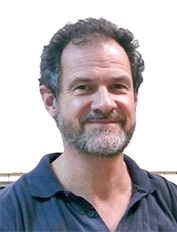 Jeff Rigby, born in 1948, is a Sydney artist and while he is best described as realist, it is the “look” of reality, rather than truth for its own sake that is important to him. He always feels free to make changes, to add or subtract elements from the subject for the sake of the picture, although sometimes the subject is complete in itself and no reinterpretation is necessary.

In this way, his marine pictures try to convey the “look” of what may have been, rather than attempting to portray the “ truth” which, in a historical sense he regards as at best, allusive and more often unknowable beyond a broad interpretation.

Landscape and architecture form the bulk of his work. He likes to deal with functional industrial and commercial buildings, often in Sydney but also farther afield. This interest extends to the harbour and its infrastructure with occasional forays into purely marine subject matter.

His interest in ships stems from childhood, aided and abetted by his father and fuelled by memories of Sydney Harbour in the 1950s and 60s when it was still one of the great ports of the world.

This interest includes a love of sailing ships, also passed on by his father, who remembered Sydney as a young man when commercial sail was very much a reality. During the 1980s, Jeff sailed much of the east coast of Australia including a number of passages on the brigantine Eye of the Wind.

Jeff now lives and works in the Blue Mountains and is represented by the Robin Gibson Gallery.