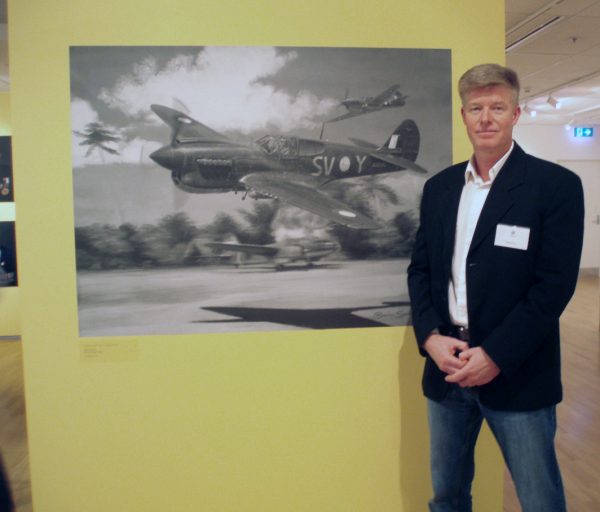 With an enthusiasm for drawing at an early age and a keen interest in aircraft, ships and military vehicles, Barry became inspired by aviation artists such as Frank Harding, Robert Taylor and Nicholas Trudgian.  He began painting in 1994, learning from books and experimentation, at first with an airbrush before moving on to acrylics, then finally settling on oils as his preferred medium.

“They Flew for the King” was the title of his first exhibition, which also included many works by the late Frank Harding.  Held in 1998 at the RAAF Association, North Adelaide, it was opened by his friend, SqnLdr Bob Cowper, DFC&Bar, a WWII Mosquito pilot and ace.

Since then Barry has completed numerous works for RAAF squadrons and Army units as well as paintings and drawings for galleries, private collectors, museums and companies for use on stamps, coins, books, model box lids and fine art limited edition prints.

In 2013, Barry was honoured with the title of Regimental artist to the Australian Army’s 1st Armoured Regiment.

He is also the patron artist for the National Military Vehicle Museum of SA.