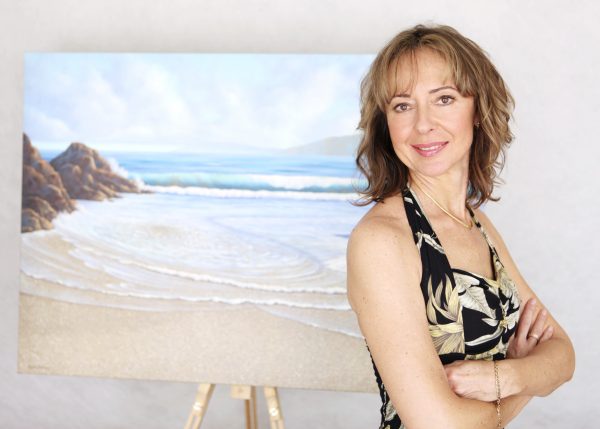 Elena’s artwork is represented in private and corporate collections throughout Australia and Internationally and in several galleries including Hamilton Island Art Gallery on the Great Barrier Reef.  With a unique style of painting that does not restrict itself to one genre, Elena enjoys experimenting with different techniques and mediums.  Her favourite subject matter is seascape painting.  Elena finds inspiration in the colours, textures and patterns of the natural world and her style celebrates attention to detail.  Elena’s artwork connects with her audience on deep emotional levels and transforms homes with its calming presence.

Elena is a regular contributor of articles and painting demonstrations to numerous art publications such as Australian Artist magazine in Australia and Leisure Painter in the UK.  Her artwork has been featured in lifestyle magazines such as Ocean and Honestly Woman, tourism magazines including Hotelier Maldives, and she has written art related features for home decorating publications such as Modern Home, Home Ideas and My Home magazines in Australia.  For 8 years, Elena was also a writer of inspirational articles for fine artists in the American business magazine Professional Artist.

As a trained teacher with a Bachelor of Education and Masters in Adult Education, Elena’s painting workshops are in high demand.  She is an international tutor with regular artist residencies in beautiful places all over the world including Hamilton Island, Fiji, Tahiti, Bora Bora, The Maldives and Norfolk Island.

In December 2015, Elena’s first book was published titled Survival Guide for Artists: How to Thrive in the Creative Arts.  An empowering book for all creative people wanting to live the life of their dreams.  Paperback available from the book section of her website and e-book available via Amazon.

“Inspired by nature, I like to draw attention to the beauty around us that often goes unnoticed in the busyness of our lives. Through my artwork, teaching and writing I aim to express a positive message. It excites me that viewers get pleasure from my paintings that touch their heart, imagination or significant experience in their lives. My challenge is to inspire others and share my passion for artistic creation.”