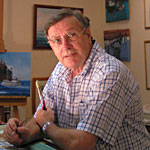 Don was born and educated on Merseyside , England in 1937, growing up when Liverpool was a very busy port which gave him the interest in ships and the sea. (His very first prize award at age 10 was for a model of ships in Liverpool docks). Deciding on a career in art instead of the sea. Don graduated with NDD and ATD (1960) and later an MA, taught and lectured in art at schools, colleges and university until 1997. His teaching career took him from UK to Nigeria , Zambia , Canada and finally Australia where he spent most of his career lecturing in art at Griffith University . Among his interests in teaching were developing drawing courses for distance education students and illustrating for texts and scientific publications.

Don continued his interest in marine art with voyages by sea as artist in residence with CSIRO, Australian Maritime Safety Authority and RAN Hydrographic Service. These voyages depicting the crews and ships at work resulted in exhibitions in Hobart , Brisbane and Wollongong . His interest in the last of the conventional cargo ships, ‘Capitaine Wallis’ led to an exhibition of the ship’s history in Sydney and Noumea.

Much of Don’s work is by commission and many of these are worldwide. After initial requirements have been discussed a pencil/colour sketch is sent for approval and/or alteration. The painting is commenced when all aspects are satisfactory and an image sent on completion for final approval. Don is available for commissions worldwide at reasonable prices – contact him to discuss your requirements.

Don’s paintings have won many awards and his work is in many public, private and corporate collections worldwide. Solo exhibitions have been held in Brisbane , Sydney , Hobart , Wollongong , Wondai,Granville , France , Noumea , New Caledonia and Kobe, Japan.

His work has been displayed at prestigious events like Mystic Marine International, USA, Royal Society of Marine Artists, London and ANL Art Awards in Australia. Published articles have appeared in Australian Artist and he is listed in Painters of New Caledonia C20.

Subjects: Don paints many aspects of the sea, ships and docks, both historical and contemporary